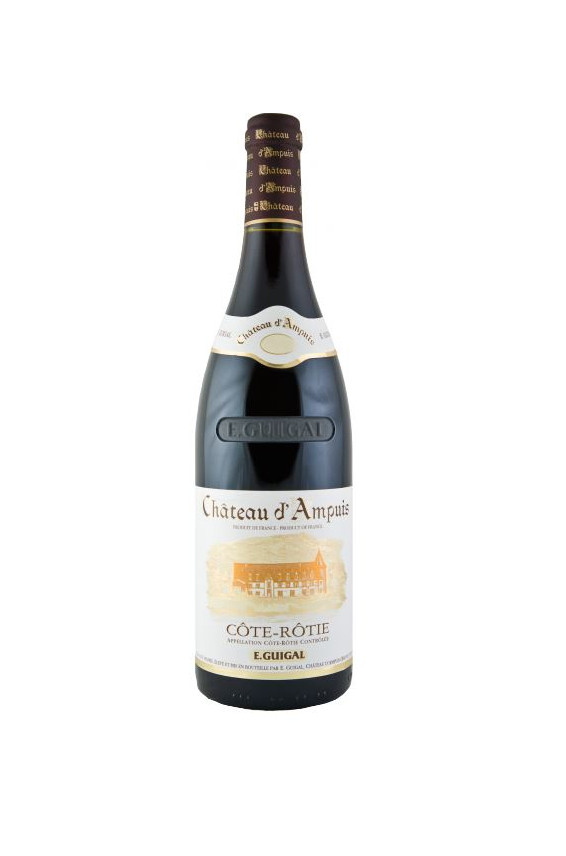 Robert Parker Wine Advocate "A behemoth that satisfies on all accounts, the 2009 Cote Rotie Chateau d’Ampuis (93% Syrah and 7% Viognier) got a big “Wow!” in my notes. Deep, rich and incredibly layered, with massive Syrah fruit, bacon fat, espresso roast, licorice and chocolate, as well as a striking minerality that emerges with time in the glass, this full-bodied, dense and superbly concentrated 2009 should be given another handful of years in the cellar, and consumed over the following two decades.

One of the highlight tastings during my more than two weeks spent working in the Northern Rhone, this set of releases by the father/son pair, Marcel and Philippe Guigal, is about as stacked a lineup as you’ll find anywhere in the world. From their tiny production Cote Roties, to the massive production level Cotes du Rhone (red and white), the quality here is impeccable, as is the attention to detail at every step of the winemaking process. Looking at the vintages reviewed here, reds first, their 2009s are some of the most bombastic, decadent and thrilling wines out there. While they have the over the top richness that allows them to dish out plenty of pleasure even now, they need 4-5 years to integrate their oak and to fully flesh out. Count yourself lucky if you have a few of these hidden in the cellar. More classic in style across the board, the 2010s are more focused and straight, yet similarly concentrated, if not with additional density. They will take slightly longer to come around compared to the 2009s, and certainly offer a more textbook drinking experience. They, too, are at the top of the wine hierarchy. The 2011s show the vintage nicely with slightly more approachable profiles, sweet tannin and brilliant concentration, especially in the vintage. They still have another year in barrel to go, but will certainly be among the top wines of the vintage, have broad drink windows, and should come close to what was achieved in 2009 and 2010, albeit in a different style. Lastly, the 2012s should, in my mind, surpass the 2011s, as they have a smidge more overall density, as well as fabulous purity. Neither the 2011s nor 2012s have the density of the 2010s, nor the sheer wealth of material that’s found in the 2009s. Nevertheless, time will tell, and these wines won’t be bottled for some time yet. Looking at the whites, 2011 and 2012 are similar in quality. Both vintages have beautiful purity, good overall acidity and good concentration, i.e., lots to like. Whether or not we’ll see a 2012 Ermitage Ex-Voto Blanc (which was not produced in 2011) remains to be seen, but what I tasted was certainly promising, if not earth-shattering (as was the 2010!). Looking at the Chateau d’Ampuis releases, this cuvee is a blend of vineyards (La Garde, Le Clos, Grande-Plantee, Pommiere, Pavillon, Le Moulin and La Viria lieux-dits) and sees upwards of 38 months in 100% new French oak."

WHAT THEY SAY ABOUS US

In a secure polystyrene packaging

Find out more about our rates

VAT-EX sale for outside EU deliveries

Free collection in our warehouse near central Paris